Hi guys!
Sorry I haven’t been posted in a while. I have been busy with my studies, events, and my work outs  since its almost summer.. (nagpapasexy lang .. haha)

Speaking of Sexy… Here is a brief post about the Sexy Soulful Voice of Mr.Garth Garcia 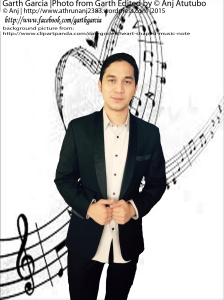 Let us, welcome the month of March and march off to FisherMall on March 1, 2015 at 5pm and with the unique soulful voice of Garth Garcia and the  Grand Champion of Pinoy Dream Academy (PDA) season 2 the beautiful Ms.Laarni Lozada.

And here are the following schedules and events of Mr. Garcia:

The Girl Who Games